Welcome to our new Blog. This is the 1st installment of our Blog about our renovation project in Stratford, Ontario Canada.

Just a quick note. In some areas, I have put in links to pages with further information, definitions, or contacts of people who assisted in the project. These links are in bold and blue.

This grande old dame is getting a complete face-lift. She has stood the test of time (built in 1902), a disastrous fire around 1955 and numerous renovations and modifications over the years. Not all the renovations were graceful, and the basement had never been completed or turned into useful space. The exterior walls had never been insulated, the existing windows (not original) are vinyl of 1970s vintage (leak like a sieve) and the heating system, although functional, required a 175,000 boiler to keep up with the heat demands. All the floors in the house were failing and had an unusual “wave” to them. A trip to the basement and the discovery of 5 jack posts clearly explained that most of the main structural beams of the house were slowly failing, and causing the floors to move with them. We were certain that there were as many hidden surprises as there were clearly visible flaws, so we were keenly aware that there would be surprises. 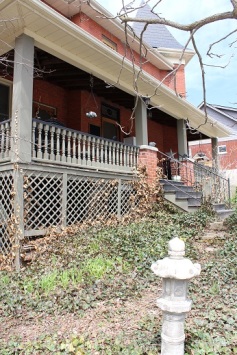 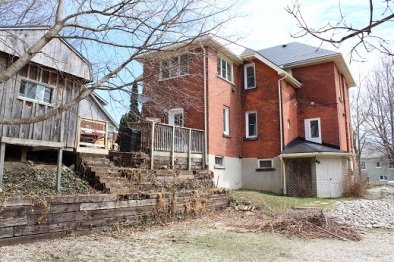 The landscaping was in dire need of an overhaul, with English Ivy running wild everywhere including up the side of the house, and all over the front and back yards. We discovered ancient rotting railroad ties that had been used as a retaining wall in the back yard. Not ideal.

But we were encouraged by the fact that the “bones” (ie, foundation) of the house were in great shape.

So with clear minds, we forged ahead and set out to revamp this old house, and turn it into a model of energy efficiency, and while trying to keep as much of the old traditional as possible, we definitely wanted to give the interior a more modern feel. We had a list of essentials that we were going to do:

So, well armed with knowledge of previous projects and CasaClima and Passive House training, we hired John Hood Tidman of Arky Design to draw up our plans. After the usual back and forth, we finally had a set of plans which we sent off to the city for approval. They were very quick and finally around the middle of November we had an approved set of plans. We were good to go.

However, before completing the submission of the reconstruction plans, I ask for and received a demolition permit, so we could continue moving ahead with the cleanup, dismantling and removal of all the unnecessary parts of the house. So, move on to post #2, for the adventures of demolition and learn more about the value of a 40 yard dumpster and 20 Rubbermaid garbage cans!!

We are deep-energy renovating a 1902 red brick Victorian. We are builders and renovators, and currently live in an almost passive house.
%d bloggers like this: